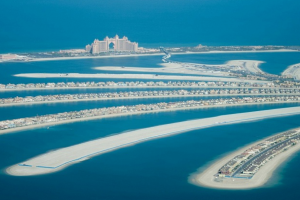 4996 views
An artificial archipelago created using land reclamation by Nakheel, a company owned by the Dubai government in United Arab Emirates and was designed and developed by HHCP architects.

An artificial archipelago created using land reclamation by Nakheel, a company owned by the Dubai government in United Arab Emirates and was designed and developed by HHCP architects. It is one of three islands called the Palm Islands (Palm Jumeirah, Palm Jebel Ali and Palm Deira) which extend into the Gulf, increasing Dubai’s shoreline by a total of 520 kilometers (320 mi). The Palm Jumeirah is the smallest and the original of three Palm Islands under development by Nakheel. It is located on the Jumeirah coastal area of the emirate of Dubai, in the United Arab Emirates (UAE).

The Palm Jumeirah is in the shape of a palm tree. It consists of a trunk, a crown with 16 fronds, and a surrounding crescent island that forms an 11 kilometers (6.8 mi) long breakwater. The island is 5 by 5 kilometers (3.1 by 3.1 mi) and its total area is larger than 800football pitches. The crown is connected to the mainland by a 300-metre (980 ft) bridge and the crescent is connected to the top of the palm by a subsea tunnel. Over the next few years, as the tourism phases develop, The Palm Jumeirah is touted as soon to be one of the world’s premier resorts. The Palm Island is the self-declared 'Eighth Wonder of the World'. The island doubled the length of the Dubai coastline.