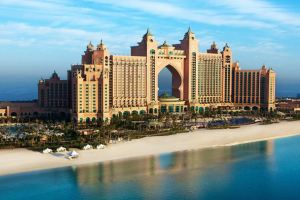 “Best Hotel in the Arab World” winner at the prestigious SABQ Tourism Awards in Riyadh, Saudi Arabia, on 5th January 2013.

SABQ Tourism Awards aims to recognize market-leaders in the hospitality and tourism industry across the region. The category of ‘Best Hotel in the Arab World’ was voted by the public and Atlantis, The Palm received over 28,000 votes from across the country taking first place.

“Winning ‘Best Hotel in the Arab World’ at the prestigious SABQ Tourism Awards ceremony is a great achievement for the Atlantis team,” commented Serge Zaalof, President and Managing Director, Atlantis, The Palm. “Saudi Arabia is an important market for us and we feel immense pride winning the people’s vote.”

Atlantis, The Palm is a resort located on Dubai’s reclaimed artificial island Palm Jumeirah. It was the first resort to be built on the island and is based on the myth of Atlantis includes distinct Arabian elements. The resort opened on September 24, 2008 as a joint venture between Kerzner International Holdings Limited and Istithmar.

The resort has two accommodation wings, also referred to as the Royal Towers, consisting of the East and the West Tower, both linked together by the Royal Bridge Suite. The resort’s comprises 1,500 guestrooms and suites with private balconies and views over The Palm and the Persian Gulf. The Imperial Club has over 150 rooms and suites with exclusive services and a private club lounge and views of the Arabian Sea or The Palm and Dubai skyline.

The Royal Bridge Suite, spanning the Royal Towers, is 22 stories up with views of The Palm, Dubai and the Persian Gulf. The two Underwater Suites are each three stories high with views directly into the Ambassador Lagoon.

The Atlantis is situated on Palm Jumeirah, part one of a trilogy including the larger Palm Islands: Palm Jebel Ali and Palm Deira , whose construction has been put on hold since 2008.