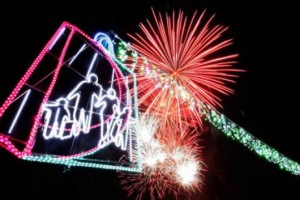 08 Mar, 2013 6620 views News
Dubai: An exciting shopping season beckons in Dubai as the month-long 19th Dubai Shopping Festival will get under way on January 2.

The Dubai Festivals and Retail Establishment (DFRE), an agency of the Department of Tourism and Commerce Marketing (DTCM), has announced the dates come in the wake of a hugely successful ‘Summer is Dubai’ campaign, which promotes Dubai as the summer destination of choice for families in the UAE and from around the world.

Organised by DFRE, the three-month-long drive, which ends on September 7, brought together a number of enormously popular events for Dubai’s annual summer season. These included the ever-popular Dubai Summer Surprises festival, which ended on July 7, Ramadan in Dubai, which showcased a number of cultural activities reflecting the importance of the month, Eid in Dubai, which united local communities and people from different cultures in celebration of Eid Al Fitr, and Modhesh World, the largest indoor family edutainment destination in the Middle East.

DSF 2014, which will also kick-off Dubai’s events calendar in the new year, will once again make the emirate a key attraction for visitors from around the world with 32 days of non-stop celebrations featuring entertainment, shopping and incredible prizes on offer.

Laila Suhail, chief executive of DFRE, said: “We are very pleased to announce the dates for the next edition of Dubai Shopping Festival, the region’s best entertainment and shopping extravaganza.

“By announcing the dates now four months before DSF 2014 commences, we can provide everyone involved in organising the event — from retailers to hotel operators and travel agents here and overseas — adequate time for planning, preparing and implementing an extensive line-up of high-quality events and shopping promotions. Working together with our partners and sponsors DRFE can ensure that the DSF truly remains faithful to its promise of delivering an unforgettable experience to millions of visitors from around the world.”

Laila believes the scale of that success has been boosted by the fact that Dubai’s leadership had a pioneering vision when it comes to the festival industry and its long-term impact.

“The creation of a dedicated government entity to organise world-class festivals is something that Dubai has uniquely pioneered since 1996, while other similar citywide festivals are mostly driven by the private sector, and this is one of the main reasons why DSF is one of the longest-running and most popular and successful shopping festivals in the world.”

“The 19th edition of Dubai Shopping Festival will also be a part of the significant measures being undertaken by DFRE and DTCM as a body to contribute towards Dubai’s tourism strategy of increasing tourism arrivals to the emirate to 20 million a year by 2020 as an integral part of the vision of His Highness Shaikh Mohammad Bin Rashid Al Maktoum, Vice-President and Prime Minister of the UAE and Ruler of Dubai.

“Our own teams have already begun work on DSF 2014 with the aim of bringing out yet another successful edition that will further boost Dubai’s image as an international events hub of global excellence and reinforce the trust shown by the International Festivals and Events Association that honoured Dubai with the ‘World Festival and Event City’ award for two successive years in 2011 and 2012”.

Laila also expressed her appreciation for the unstinting support provided by government bodies and strategic partners and key sponsors in the private sector, and noted this commitment of DFRE’s stakeholders has been consistent in its dedication to ensuring a successful annual festival from the very first DSF.

Since it was launched in 1996 DSF has grown from a mere shopping event to an international entertainment and shopping extravaganza that continues to draw millions of visitors to Dubai every year.